Interview with the author! 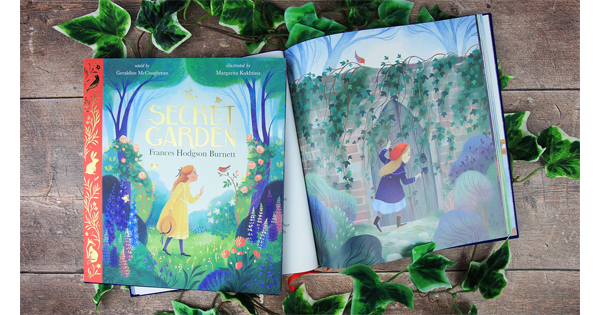 This week, we’re joined by the team at Nosy Crow to celebrate the launch of the latest retelling of a children’s classic: The Secret Garden. As part of this activity, Nosy Crow is offering 5 lucky readers the chance to win a Secret Garden bundle. But before you click away, stay a while… we got the chance to speak with Geraldine McCaughrean, the best-selling author behind the beautiful retelling of The Secret Garden. She tells us about her involvement with this adaptation, and she also tells us about the other titles that she has in the pipeline…

1. Why were you particularly keen to retell The Secret Garden?

Well, when approached about writing it, I did have my misgivings: there are a great many versions out there, and by excellent writers, too.  It was the ‘extent’ that tempted me – the wealth of pages I was allowed, in order to tell the story.  Picture-book retellings are often compressed to a point where the original story gets bent seriously out of shape and the nicer nuances go by the board for want of space.  I know full well that myths and fairy tales can be told to almost any length.  But an actual author’s work and intentions?  They need to be honoured as much as possible by whoever takes her work and offers it to the public in an altered form. If I could have asked her permission, I would.

2. What is it about The Secret Garden that makes it as enjoyable today as it was when it was first written?

Quite unusually, the main protagonist begins the story as a horrible, brattish child. We might pity her, but we don’t like her.  Little by little, she comes good.  The reader wills her to behave decently and – lo! – she finds someone she likes.  She keeps tally of the people she likes, and invites the reader to like them, too.  We move from being outside Mary, watching her, to identifying with her, seeing things through her eyes.  We urge her on.  It’s an unusual shape for a plot.  Colin follows the same path, a bit behind her – like a fugue in music – and then we’re left waiting for Colin’s father to add the last strain of the fugue and achieve all-round happiness. 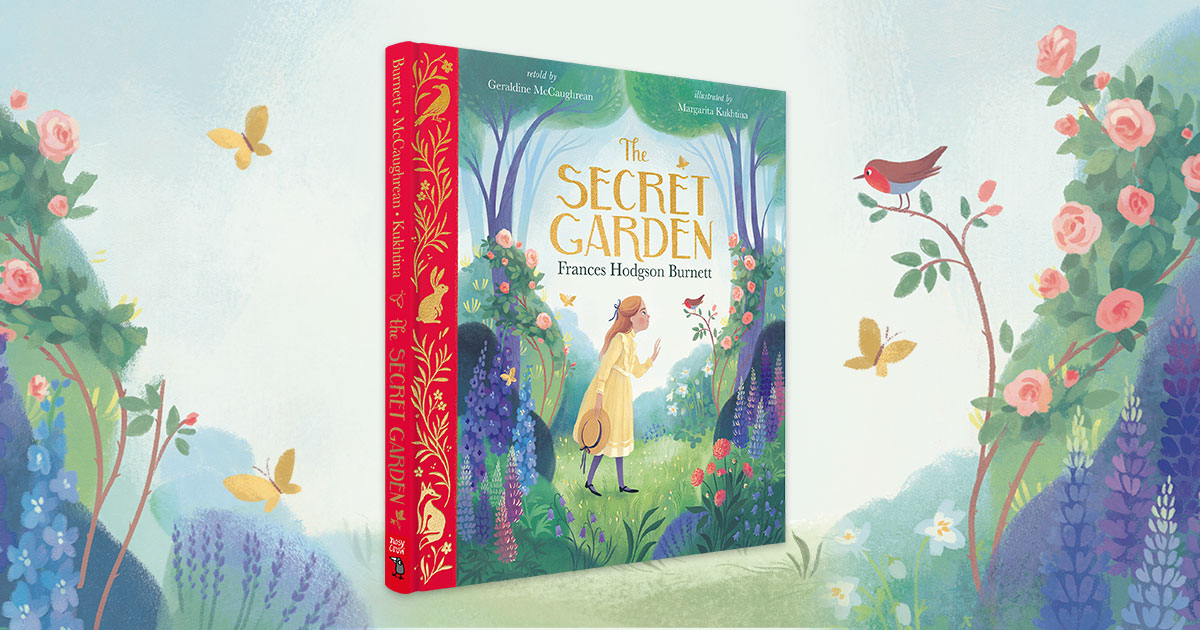 3. How have you adapted the story to make it more accessible/relevant to the children of today?

I was determined to be as true to Frances Hodgson Burnett as possible.  I saw my job as being to cut it as sparingly as I could and clarify anything a modern child might not have the life-experience to make sense of. For instance, there is a lot of ‘dialect’ in the original which might stop young eyes in their tracks. All the same, I really did want to keep ‘wick’ in there, because it’s just such a great word and, in context, self-explanatory.

As for ‘relevance’….  Nothing is irrelevant to a child’s developing mind.  The past is interesting, the present is interesting, the future… other people’s strange, bewildering lives, the way Granny’s life was different from Mummy’s, how gardens change with every passing day, the odd way children used to dress, that illness used to be mysterious and hidden away… In fact, I’d say that fiction is all about actually escaping the Here and Now and taking a holiday ‘somewhere else’.  “Children these days won’t relate to the 50s,” say publishers. No. At birth, they won’t relate to anything but their mother’s breast. At five they won’t relate to the First World War or crinolines or keeping coal in a coal bunker, or what it’s like to be old or what it’s like to be an anteater.  But their insatiable brains are capable of expanding to encompass the solar system.  So long as they get a chance, little by little, to meet with imagination, loads of vocabulary, variety, news, history, empathy, interest, humour, morality and a happy ending, they will be able to relate to all manner of people and things. Even – shock! amazement! – books set in a time other than Now. 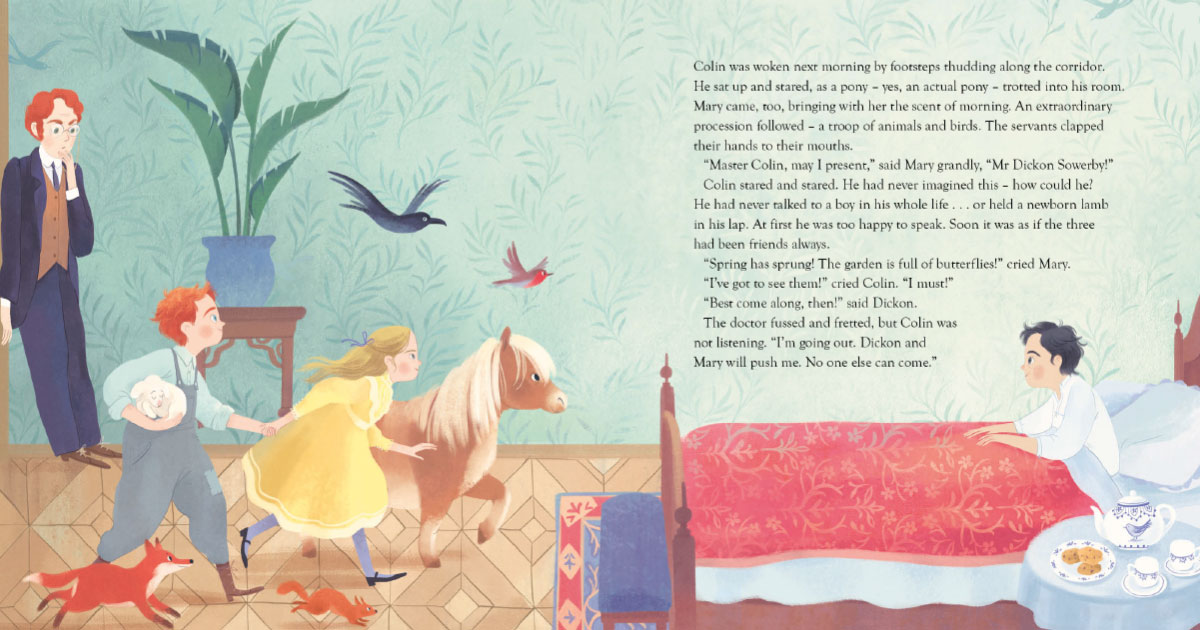 4. Convince our readers – why should they be rushing out to buy this book for their children?

1) It’s a story that has been enjoyed, without pause, from 1910 till now, and all over the world.  All those readers can’t be wrong.

2) Many authors cite it as the book they loved most as children.

3) The physical book is lavish and glorious….

Oh, and you’ll never look at robins in the same way.

5. Which other classic stories have you retold and how do you choose which stories to retell?

Ah well! truth to tell, authors don’t do the choosing. All retellings are initially the idea of a publisher, who will then contact the author suited to writing it.  I’ve done The Nutcracker, The Oxford Book of Fairy Tales, Stories from Shakespeare, 100 World Myths and Legends, Canterbury Tales, Wenceslas, Moby Dick, A Pilgrim’s Progress, Gulliver, The Arabian Nights, Beauty and the Beast, Cyrano, even the Bible… twice.  Oh, and dozens more. I’m so lucky to have been entrusted with so many delectable commissions.  As for the Greek myths, I’ve done The Odyssey about 7 times now for different purposes/ages: in 10 pages, 50 pages 100 pages and 200 pages. Lovely, malleable, myths.   But my favourite, above all, is Gilgamesh the Hero, the oldest written down story in the world – 4000 years plus …and as fresh and vivid as when it was first written in wet clay with a stick.

Oh, and I did write the ‘official sequel’ to Peter Pan – not quite a retelling, though it happily rubbed shoulders with a classic. 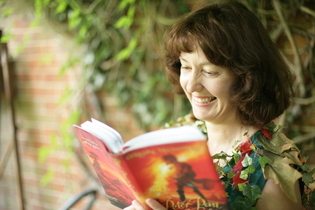 6. What do you enjoy writing about?

Adventure.  I think all my novels have been adventures, though I do try to make them all different from one another. I’ve set them in a variety of countries – for the joy of going there, albeit in my imagination.

7. Describe your style of writing in three words.

8. Do you have any plans for new titles moving forward?

I’ve been writing a book during lockdown.  Time will tell if it suits. Publishing has changed hugely during the last year, so I’m keeping my fingers tightly crossed. Another picture book – A Tale of Two Dragons – is due out later this year, and I’m hoping to do a trilogy of younger books that specifically delight in ‘words’.

Thank you for the chance to tell you about The Secret Garden.  I’m hugely grateful to Nosy Crow for entrusting me with the project.  I’d be interested to know which books you remember most vividly from way back, and which (if any) you would like to see ‘reinvented’, ‘adapted’ or brought back into print.