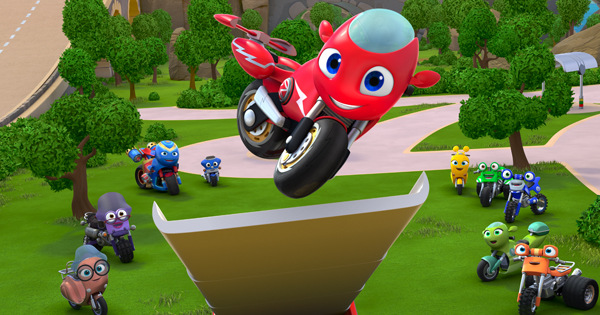 Ricky Zoom is the action-packed children’s television show about Ricky, a little red rescue bike, and the adventures that he gets up to with the help of his family, friends, and his community.

With a fun-filled fortnight ahead, we’ll be zooming into the world of Ricky Zoom, with information about the show, a rundown of some of the best Ricky Zoom products in the range, product reviews, free downloads, and of course a fantastic comp to win Ricky Zoom prizes!

Because a takeover just wouldn’t be the same without a show-stopping Twitter Frenzy, Ricky will also be zooming into our Twitter feeds for an epic event that you won’t want to miss! With prizes, activities and lots more in-store, be sure to join us on Thursday 19th November from 13:00 to 15:00 and get involved! Don’t forget to use #RickyZoomFamilyFun too and tag us @UKMumstv so we can see your tweets.

You can get up to speed with Ricky Zoom by tuning into Milkshake! every week day at 7.40am.