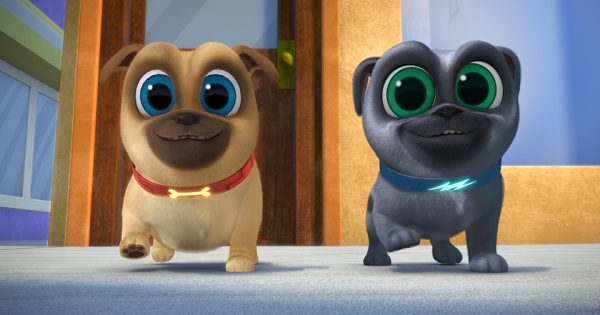 If you’re not already head over heels in puppy love with the stars of Puppy Dog Pals, get to know the characters even better with our intro to the characters on the show.

It’s not just pups, there’s Hissy the sarcastic cat and A.R.F too!

Bingo – Bingo is smart and fast on his feet. He is the idea guy and a problem solver, but he also loves to play. He is just a few seconds older than his brother, Rolly.

Rolly – Rolly brings his silly, sweet energy to everything he does with his brother, Bingo! His favourite colour is red and one of his best catch phrases is “Rolly power to the rescue!”

Hissy – Hissy is Bob’s cat and Bingo and Rolly’s big sister. They adore her, and the feeling is mutual (although she rarely admits it). According to Hissy, she is more experienced than Bingo and Rolly. She revels in the role of smart big sister and is happy to share her wisdom with the Pugs. She has a dry, understated sense of humor.

A.R.F – A.R.F. (“Auto-Doggie Robotic Friend”) is the lovable robot dog who lives with Bingo and Rolly. Bob created him to interact with the Pups while he is at work, but ARF soon becomes a full-fledged member of the family. ARF is always the first to laugh when Bingo and Rolly tell a joke.

All of these characters and more are available to collect in the brand new range of Puppy Dog Pals toys. From collectable figures and playsets to interactive talking plush characters, there’s so much to explore and collect! Check out our rundown here.