Tune into the Mouse in the House series on YouTube! 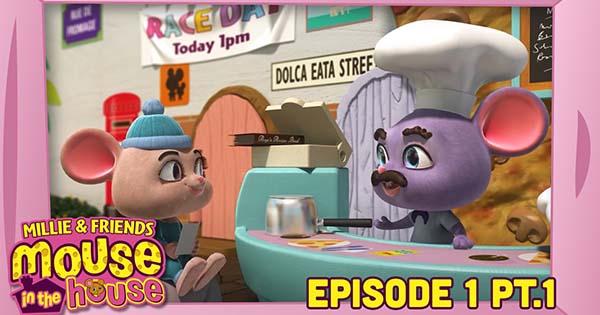 You know something is good when it’s the cat’s whiskers… but do you want to know what’s even better? When it’s the mouse’s whiskers!

This week, on UKMums.TV, we’re joined by Character Options for a whistle-stop tour of Mouseville – the teeny-tiny, magical world of Mouse in the House, which exists just behind your skirting board…

In our on-site guide to the Millie & Friends Mouse in the House toy collection, you can read all about the adorable, mini-collectable mouse figures and playsets that are available to buy now from Argos, Smyths, Sainsburys, Amazon, and Tesco. This delightful toy world brings Mouseville to life for children to explore!

But the fun doesn’t stop here…

All the lovable characters and adorable places available in the toy range have been adapted for the screen, into 3-minute CGI animated webisodes, available to watch on YouTube, via the Character Kidz TV channel. Each webisode tells a story of adventure and fun, featuring a selection of characters from Mouseville, and centred around at least one super-cute location that’ll make your children squeak with delight!

Pip is SO excited! Regi the Pizza Chef Mouse has the day off, leaving Pip in charge of The Slice ‘O’ Pie Pizzeria. However, problems arise when Pip decides to ignore Regi’s recipes and make pizza ‘her way’. Before long customers are returning pizzas, complaining they taste like rubber! It’s a disaster…

It’s also the day of the big race, and Shine has been practising so hard that she’s worn through the soles of her trainers! Then Millie has an amazing idea for a solution to Shine’s sneakers problem!

An introduction to some of the residents of Mouseville…

When Millie gets an idea into her head, you can almost hear the whirring. Nobody else in Mouseville thinks quite like Millie. Before you know it, she’ll be tapping away on her phone and bringing an amazing plan together. She is such a clever mouse, but she doesn’t let her brain get in the way of having a good time! If there’s fun to be had, she’ll always sniff it out. Millie is also brave but not reckless; she’s the leader of the gang and it’s a role she takes very seriously. Millie knows it’s her job to keep the others in check, safe and happy. Famous for her winning smile, her grin can usually smooth over any issues that occur during the gang’s adventures.

Scratch is Millie’s younger brother – but don’t say that too loud though, Scratch likes to be known as his own mouse! He’s the type of kid who always has plasters on his knees. He is always falling into trouble because of his desperation to seem as mature as possible. In fact, the only thing more certain than Scratch getting into mischief is it’ll be his big sister getting him out of it again! As the lone boy in the group, the rest of the gang view Scratch with a mixture of horror and affection. There are times when he can be infuriating, but they simply wouldn’t be without Millie’s brother. Nobody else would come up to Scratch…

If you want to know all about the latest mouse fashions, Sparkle is the one to ask! The style conscious celebrity of the group, Sparkle is often followed by camera crews, keen to get her views on the latest styles. In contrast to her sister Shine, Sparkle’s life revolves around wearing, talking and dreaming about clothes. The only thing that scares Sparkle more than having her clothes splashed with mud is the prospect of being caught in last season’s styles. Don’t get Sparkle wrong, she’s got a great sense of humour. If you’re looking for laughs, Sparkle should be your friend… just don’t drip ketchup on her latest designer dress!

This sporty mouse LOVES to be constantly on the move, running on the spot, doing press-ups or playing her favourite game – soccer. If there’s mud to be found, Shine is sure to be covered in it within seconds. Unlike her sister, Sparkle, Shine doesn’t like dresses and girlie things. She simply doesn’t have time for all that! Shine loves nothing better than getting up early in the morning and riding around Mouseville on her (very loud) moped. If that doesn’t wake the gang up, she’ll soon be bouncing her soccer ball on their door looking for someone to play a match with. It’s true to say that Shine and her sister Sparkle get on each other’s nerves from time to time, but, despite their differences, they love each other dearly.

Can you hear that sound? It’s Pip snoring! Pip likes being the baby of the group, she’s more than happy to leave ‘being in charge’ to others. A real homebody, Pip is a gifted chef who loves nothing more than cooking for her friends. Pip’s other favourite thing is to go to sleep. Pip can take a nap in any place at any time. Her skill really is amazing, Pip could kip through a marching band performance. So, if you’re in Mouseville and you hear some squeaky snoring, it’s probably coming from Pip!

Love the sound of Mouse in the House, or know someone who would? You can watch the webisodes via the Character Kidz TV YouTube channel and you can shop the toy collection at Argos, Smyths, Sainsburys, Amazon, and Tesco.