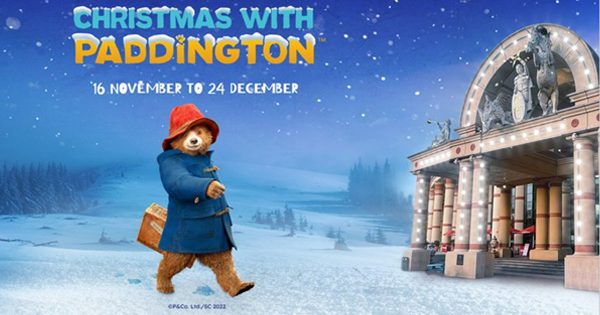 Embark on a festive adventure with Paddington as he gets into the Christmas spirit. For all little cubs and grown-ups alike, here are a few suggestions on how to enjoy some Paddington-inspired winter activities. Don’t forget to take your cuddly Paddington toy along to join in the fun too!

Discover the city of London whilst enjoying a delicious Paddington-themed afternoon tea this winter with Brigit’s Bakery’s Paddington Afternoon Tea Bus Tour! Embark on a sightseeing tour of London’s most famous landmarks, that Paddington and Mrs Bird will tell you all about. On board, you can enjoy a delicious Paddington inspired afternoon tea, including the best marmalade sandwiches ever! To book: https://b-bakery.com/london/bus-tours/paddington-afternoon-tea-bus-tour

Christmas with Paddington at The Trafford Centre – 16 November – 24 December

Why not take a trip to The Trafford Centre and enjoy ‘Christmas with Paddington’, a fully themed grotto experience, featuring the nation’s favourite bear, Paddington.  Journey through tree-lined walkways and snowy streets, then onto frosty snow-covered night-time rooftops before entering the cosy home of The Browns and Paddington. There are lively elf characters to meet, enchanting interactive scenes and plenty of special photo opportunities along the way!

For Paddington fans in the south west, the Cribbs Causeway Winter Wonderland will be offering free story telling and meeting greet sessions with everyone’s favourite bear! Sessions to meet Paddington will run each day, with everyone being offered the chance to have an official photo with Paddington. A limited number of spaces will be available to reserve in advance, as well as walk-up spaces available for each session on the day.

For over 60 years, British-born writer Michael Bond has delighted readers all over the world with his stories about Paddington, the bear from Peru, famous for his love of marmalade. The kindness and humour in the stories appeal to children and adults alike, ensuring Paddington’s enduring popularity from one generation to the next. HarperCollins Children’s books have published Paddington’s adventures continuously since 13th October 1958 when, as William Collins, they first introduced A Bear Called Paddington to the world.

Since then, Paddington’s adventures have been adapted several times for television and at the end of 2014 Paddington made his debut onto the big screen, a further film Paddington 2 followed in 2017 with a third in the works. The movies were produced by Studiocanal, part of the international content and media group Vivendi. In 2020, a brand-new Paddington TV series designed for a pre-school audience, The Adventures of Paddington launched on Nickelodeon, introducing him to a whole new set of fans.

Feature image credit: Christmas with Paddington at The Trafford Centre