Who’s who in Ricky Zoom’s World? 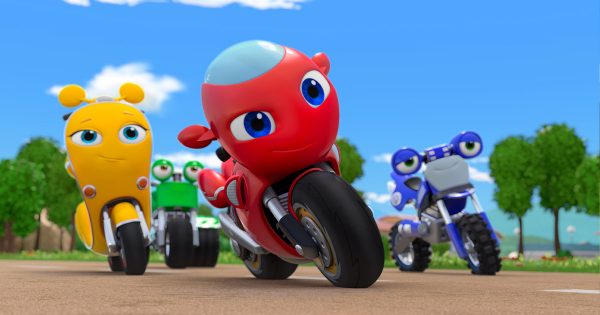 [AD] There’s a new TV series on Nick Jr. that has kids in a spin, Ricky Zoom! Packed full of adventures which are all about friendships, growing up, family and community, we definitely recommend it for the little ones. But make sure you are up to speed when it comes to who’s who in Wheelford with our drive by of the main characters.

Young, fun, and always on the run — Ricky’s a bike who’s going places! A loyal friend and natural leader, Ricky loves hanging out with his Bike Buddies, revving his engines and zooming around Wheelford! However, Ricky is still a little bike learning to stand on his own two wheels and he often dives headlong into rescue situations. Despite having cool rescue resources such as his action visor and grappling hook, he realises he still has a lot to learn.

Stunt-loving Loop is the best dirtbike friend you’ll ever have! Loop just wants to have fun – by jumping ramps, doing loop-de-loops and trying crazy new stunts powered by his Loopy Boosters. Wide-eyed and adventurous, Loop has a love for life and a happy-go-lucky attitude. He always wants the best out of every situation but, despite his best intentions, he is easily distracted!

The go-to bike when you need high-tech answers Scootio, is bright, brainy and never afraid to speak her mind! A self-professed “gadget guru”, her technical genius matches her can-do attitude and she loves nothing better than using her tech-based gadgets such as her tablet, ZoomCam and robotic Scootbops to try to find a solution to any puzzles or dilemmas the gang might face.

A rough ‘n’ tumble trike with a big heart DJ has a heart as big as his trunk – which is a super toolbox filled with everything from spanners to wrenches, hooks to hammers, that all fit onto his robotic arm. There’s nothing he can’t build – or knock down! But despite his powerful wheels and being a little rough around the edges, DJ wears his heart on his sleeve and would do anything for his friends.

There’s a large array of additional colourful characters that all live in the busy, welcoming community of Wheelford that your kids will love to get to know!  So why not give the series a test drive and watch Ricky Zoom on Nick Jr. at the weekends.