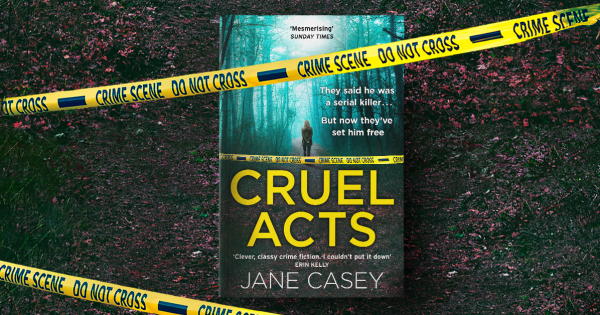 #AD The colder evenings are closing in and there’s nothing we love more than winding down at the end of the day than with a good book and a cup of tea, so we were delighted when the team at HarperCollins asked us to review Cruel Acts by award-winning author Jane Casey.

We have read a lot crime fiction between us here at UKMums.TV, but somehow haven’t read anything by Jane Casey before! We’re not sure how she’s managed to go under our radar, but we were really glad when HarperCollins asked us to review the paperback format of Cruel Acts, the eighth book in the Maeve Kerrigan series (better late than never).

Cruel Acts has been described as “a compulsive read” by Patricia Gibney, author of the Detective Lottie Parker series, and we couldn’t agree anymore!

The blurb reads:
“Guilty?
A year ago, Leo Stone was convicted of murdering two women and sentenced to life in prison. Now he’s been freed on a technicality, and he’s protesting his innocence.

Not guilty?
DS Maeve Kerrigan and DI Josh Derwent are determined to put Stone back behind bars where he belongs, but the more Maeve digs, the less convinced she is that he did it.

The wrong decision could be deadly…
Then another woman disappears in similar circumstances. Is there a copycat killer, or have they been wrong about Stone from the start?”

Jane Casey has a real talent for painting a picture with words that made us feel like we weren’t just reading the story, but experiencing it. The realism of it all pulled us straight into Maeve Kerrigan’s world. We also enjoyed the witty dialogue (banter) and relationship between Maeve and Josh.

If you also loved Cruel Acts, then get ready for Jane Casey’s next novel The Cutting Place coming next spring!

*Disclaimer: We were asked to review Cruel Acts but all opinions here are our own.*