Meet some of the best-loved Classic Disney characters! 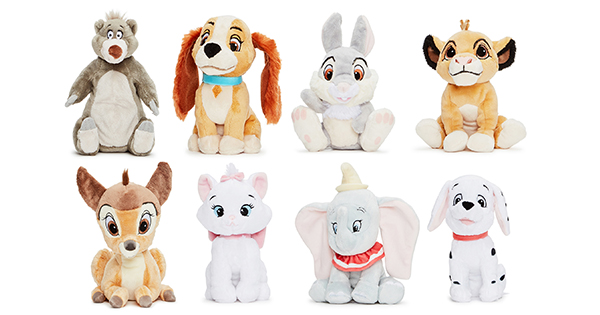 This week, we’re delighted to be able to showcase the incredible Disney Classics plush toy collection from Simba Smoby Toys UK. These plush toys are a must-see for any Disney fan – they do a wonderful job of capturing the magic of Disney’s Classic animated feature films.

Each character in the collection is super-cute, chunky, irresistibly soft, and perfect for cuddling! Fashioned in a cute cartoon style that families will instantly recognise from the classic animated Disney movies, these huggable soft toys are perfect for fans of all ages. You can read more about the fabulous toys available in the collection, here. But first, join us as we take a moment to spotlight the classic Disney characters who inspired these toys!

These adorable Dalmatian puppies are from Disney’s hugely popular One Hundred and One Dalmatians! Of the 101 Dalmatians referenced in the film’s title, 15 of the pups are Pongo and Perdita’s puppies, who are kidnapped by the evil Cruela De Vil. But, fear not, these loving parents set off on a rescue mission to save their babies… and of course the rest is history!

Lady is the female character of Disney’s Lady and the Tramp. She is Jim Dear and Darling’s pet Cocker Spaniel who falls in love with a stray mutt named Tramp, with whom she has four puppies!

It’s impossible not to love this beautiful character. Dumbo is the young elephant who rose to Disney Classics fame with his giant floppy ears. Mocked for his abnormal ears, Dumbo soon becomes the star of his own circus performance when it is discovered that his ears allow him to fly (well, glide) through the air!

Bambi is the fawn who tragically lost his mother when she was shot and killed by a hunter during his first winter. Raised by his father, Bambi falls in love with his childhood sweetheart Faline and enjoys plenty of wonderful  memories with his best friends Thumper (a rabbit) and Flower (a skunk).

Marie is the white-furred kitten from Disney’s The Aristocrats. Stylishly fashioned with her pink bow and neckerchief, Marie is the only female kitten of Duchess, the older sister of Berlioz and the younger sister of Toulouse.

Simba is the protagonist of Disney’s The Lion King, who was destined to rule the Pride Lands. Exiled after his father is murdered by his own brother Scar, Simba finds refuge in the jungle with Timon and Pumbaa. When he comes of age he returns to confront his past and take his place in the Circle of Life, and he also marries his childhood best friend Nala!

If you know a child who LOVES Disney, the Disney Classics plush toy collection is available now from The Entertainer, in-store at Tesco, and many independent toy stores.