Meet the characters from Cartoonito’s Lucas the Spider 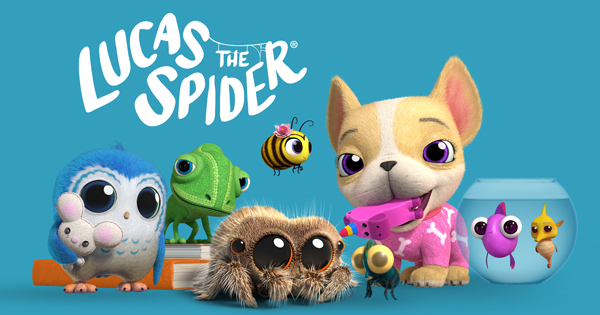 This week, we’re super-excited to be able to introduce Lucas the Spider, the brilliant new animated series, on Cartoonito. Friendship, individual differences, as well as exploration, adventure and discovery are just some of the themes that run throughout this great new show, and we just know kids (and their parents!) are going to love it!

Kids can join Lucas, the jumping spider, on his wonderous travels as he explores his exciting world – his big Victorian home and garden. The series premiers this month on Cartoonito, with new episodes airing weekdays at 6:00PM. You can read more about the series in our feature here, but first, let us introduce you to the lovable characters from Lucas the Spider.

Lucas believes in being kind to everyone and meets all kinds of creatures and friends on his adventures. Here are just some of the characters from this warm-hearted new series…

Lucas is a fluffy, brown jumping spider, who is four-years-old. He is very playful, fearless, and he enjoys exploring the world around him. He loves meeting new friends and is kind to everyone he meets. This jumping spider dreams of being a musician; he can play small instruments and is a great singer.

Findlay is a green housefly, who has very large yellow eyes! He’s also Lucas’ best friend, who affectionately refers to him as “Bzzz”. The two first met when Findlay wandered into Lucas’ faux spiderweb (Lucas is a jumping spider and so cannot make a typical spiderweb). Findlay, the shy little fly, thought that Lucas would eat him, but instead, the two became the best of friends.

Avocado is a pocket dynamo pup who barrels into any situation. She’s ridiculously and comically small for a dog, but in Lucas’s world she is HUGE!

Bodhi is a chameleon, who compared with Lucas is rather large! And whilst chameleons are known to eat flies and bugs, this mellow guy is no threat to Lucas and Findlay! He likes extreme sports and is a real surfer dude, with a mellow dialect to match.

Weebiscuit is one of two friends who live in a fish bowl in the house (the other being Dimples the Fish). He is a wise old soul but spends most of his day trying to find space in the tank where Dimples isn’t.

Lucas the Spider is available to watch weekdays at 6:00PM, on Cartoonito. For more fun with Lucas, dive back into the takeover, via the main hub page here.